Posted at 14:30h in Stories by Aleesha Khaliq 0 Comments 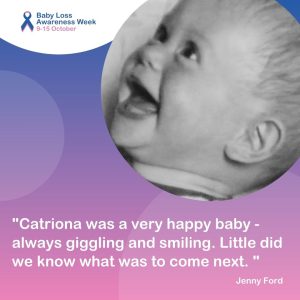 We lost our little girl, Catriona, in May 1992 when she was just seven-and-a-half months old. She was our first born; it took three years (with a little intervention) to conceive, and I remember so clearly the day I found out I was pregnant. It was the happiest day of our lives! I had a lovely pregnancy; everything was wonderful. On the 12th October, 1991, our little bundle of joy came into the world weighing 6lb 12oz; she had the most beautiful mop of dark hair. We finally had the child we so longed for.

Catriona was a very happy baby – always giggling and smiling.  Little did we know what was to come next.

Catriona became unwell. After a week of tests, the doctors at the hospital said she was fine and that it was just a virus.  A few months later Catriona developed a cough and cold, we were unable to get a doctor’s appointment for four days… within that time our precious little girl died suddenly.

It’s just a virus they said, how wrong were they. The results came back as Bronchial Phenomena.