Posted at 09:32h in Stories by Adrian Brown 0 Comments

Sarah and James de Malplaquet’s son Kit died on the 29th September 2017 when he was just 13 days old.

HSV1 or herpes simplex type 1, the virus Kit died from, is the same virus which causes cold sores in adults. Sarah and James set up Kit Tarka Foundation in 2018 to help prevent more tragedies like Kit’s.

“After Kit died, we went through absolute hell, that raw physical grief I have never come close to before. It was so painful mentally and physically and we did find it hard to cope. Even leaving the house in those first few months was a real challenge. We found solace in each other and James was absolutely incredible. We used to say that I was Head of Research (desperate to find out what had happened with Kit) and he was Head of Security (protecting me from more harm any way he could).

“We also found support from outside our little family bubble. We had asked friends and family not to send flowers or cards as we didn’t want our home to resemble a funeral parlour but we did receive messages of support. They were all so hard to read and many messages started ‘I do not have the words…’ but it still helped to know people were thinking of us. The things that really helped us through though were the practical things – the friends and family who dropped off meals on our doorstep knowing cooking would be a challenge, the celebrant who sat with us in our grief as we told Kit’s story and helped make the funeral process as simple as it could be, the friend who drove us to London to register Kit’s birth and death as we couldn’t bear to get the train, the neighbour who invited us for dinner as a first step to leaving the house. It all helped.

“We struggled with the lack of contact from some people, people who thought the best thing was not to say anything, not to visit us, not to mention Kit at all. We now know that these people were thinking of us – they just didn’t know what to do – but it was very hard to deal with at the time and still can be now. We did have some very kind and generous friends though who set up and donated to a crowd funder which paid for us to escape to Sicily a month after Kit died. Getting away helped give us another focus and I know really helped James at that time. Other practical things that helped; jigsaws, podcasts (thank you Adam Buxton for making us smile in the darkest of times), mindless games on our phones, anything to make time pass more quickly. Setting up the Foundation also helped provide a focus for me and a renewed purpose knowing that other babies would be saved because of Kit’s death. Although I have always known I would give it up in a heartbeat if it meant getting my baby boy back.

“In the years since Kit died we have established rituals we like to do. We plant a tree for him every year on or around his birthday and James carves him a small boat. Then on his anniversary we visit the river where we scattered his ashes, fill the boat with things from nature I have collected over the year and send it off down the river. James usually sings the song we played at his funeral. It is always a tough day and brings back incredibly painful memories but I do think having some rituals that are just for Kit help get us through that hardest time of year. 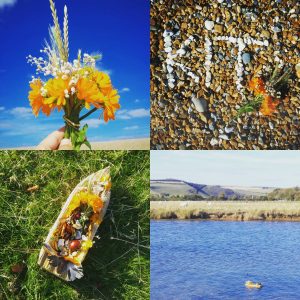 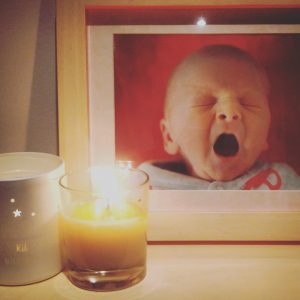 “And of course I can’t talk about things that help our wellbeing without mentioning Kit’s little brother Red who is really the one who gets us through the tough times. He is such a wonderful happy little boy who brings so much joy into our lives and makes us smile on the hardest of days. I often think about the parents who never get their ‘rainbow baby’ and I am just heartbroken for them. I don’t want to think where we would be without him.”

Sands is here to support anyone affected by the death of a baby. Sands’ free Helpline is available on 0808 164 3332 10am to 3pm Monday to Friday and 6-9pm Tuesday and Thursday evenings. You can also email helpline@sands.org.uk for support. www.sands.org.uk/support