“I will live FOR him and I will say his name as often as I can.” – Baby Loss Awareness Week

“I will live FOR him and I will say his name as often as I can.”

By Kerri and Andy Pope 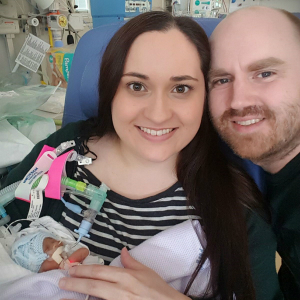 Posted at 14:02h in Stories by Adrian Brown 0 Comments

After years of waiting for the “right time” and then 18 months of trying for our first child, we finally got a positive pregnancy test. My husband Andy and I were overjoyed, the baby we’d wanted for so long was finally going to become a reality! I was too nervous to buy many baby things, but started to relax after our anomaly scan and excitedly picked out some outfits for our impending arrival.

At 23 weeks I went into premature labour. Our beautiful son Harrison was a tiny 1lb 2oz, born at 23 weeks and 3 days on 30th March 2018 after a difficult and traumatic labour. We felt extremely lucky to live so close to a level 3 neonatal unit, who checked Harrison over once he was born and decided he could make it to NICU.

Over the next couple of weeks, we were inducted into the life of a NICU parent. Our NICU were dedicated to parent led care. Because of this, we were able to change Harrison’s nappy, comfort him, read to him, wash his face and help change his bedding, all the things that a parent should get to do.

Our perfect little fighter kept surprising us day after day. He was doing so well with his brain scans, opening his eyes, tolerating my milk, breathing for himself alongside his ventilator, etc. and he was such a wriggler!

At 14 days old Harrison had a reaction to the tape holding down his long line, a wire going from his belly button to his heart. Over the next 24 hours our usually wriggly boy stopped moving around as much, we knew he was fighting something, but our amazing NICU staff picked it up straight away.

On Harrison’s final day we sat beside his incubator willing him on, watching as his body stopped functioning, as he went anaemic immediately after a blood transfusion and stopped breathing for himself. The word sepsis had been mentioned a couple of times, but we knew the NICU staff were so competent and he couldn’t die, he was our fighter. Harrison passed away on 15th April 2018, we found out a few days later that he died of pseudomonas sepsis. Neither of us have ever experienced pain like the day our son died in his Daddy’s arms, and I hope we never do again.

All at once, our scary but amazing NICU experience ended abruptly with us walking our tiny son’s body through the hospital, outside and past the A&E entrance and to the mortuary at 3:30am, with Andy shielding him from passers-by. We then had to leave the NICU. We walked out of the hospital in utter shock, with all of Harrison’s belongings in a bin bag.

The following few days were a blur of shock, numbness, pain and tears. I knew that Andy and I would have problems with processing the things we’d seen on Harrison’s last night, as the NICU team fought to save Harrison.

After Harrison – Kerri’s story
I can’t speak for Andy at this point, but I felt like my life had ended too. I had gone into labour, Harrison was perfect, just born far too soon. My body had let my son down, and as a result he had died and I had to live in the body that had caused his death. My guilt and grief were all-encompassing.

My milk had increased the morning after Harrison’s death, I’d been prescribed medication to help increase production a couple of days earlier. I was hoping the lactation specialists from the NICU or a midwife, anyone, might call and advise me what to do. Having given birth nearly 17 weeks early, I’d not done any research yet on breastfeeding / expressing, and how to stop. A receptionist at my GP’s office felt sorry for me, and requested a prescription to reverse the effects of the other medication.

I asked my GP for help dealing with what I’d been through. I was told that it wasn’t rational to blame myself, that I was young and could still have more children. I was then signposted to iTalk, an Improving Access to Psychological Therapies (IAPT) service. I spilled my heart out to a telephone practitioner, who advised me he would speak to his team and see what they could do for me. I waited a week for a call back, to be told there’s nothing they could do.

I returned to my GP as I was struggling with traumatic flashbacks of Harrison’s last night every time I tried to sleep. I’d cry until I couldn’t breathe, a primal noise that I’d never made before. On the nights I did manage to sleep, I’d get phantom kicks and wake up thinking I was still pregnant; a cruel trick of the body that many loss mums experience. I was told once again that there’s nothing my GP could do, that the hospital should help. I was then batted between the two until I gave up. Eventually, despite being on maternity pay, Andy and I decided that a private counsellor was the only way we’d get help.

I’d fed back to my hospital, health watchdog and local CCG. I didn’t want any other parents who couldn’t afford private counselling to slip through the cracks, but I was told that it was the hospital’s responsibility to look into this. My hospital didn’t have the resources at the time.

A close friend of mine was so surprised and disappointed at the lack of help available in my area compared to other friends who’d experienced similar elsewhere, that she wrote to my local MP. The MP’s office wrote to me asking for approval to liase with my friend on my behalf. At the time the signposted me to the places I’d already tried, but since then we’ve heard nothing back, that was months ago.

Andy isn’t receiving any support following Harrison’s death, other than being signed off work for a short time. He watched his child die, no one should see what we watched on Harrison’s last day. In my experience, what little support there is after baby loss is mostly directed at Mums, there needs to be platforms that help bereaved Dads to grieve in their own way, I know Andy finds it much harder to talk about his feelings than I do.

Andy’s story
I believe Harrison received the very best care during his short time with us, the NICU staff were nothing short of amazing.

What came after made me feel like we were simply being difficult and that absolutely no one had even the slightest idea about what to do with our issues. In fact we were made to feel like we should simply move on and forget about what happened. Having to watch Kerri repeatedly relive the death of our baby boy over the telephone to every person that wanted to know what the issue was cut deeper than almost anything I have experienced. As her husband I always feel like I should have the answers, I should be able to help, I should be able to protect her and I should never let my wife suffer like this. I could do none of these things, I was completely useless as far as I saw it. All I desperately wanted was a direction so that I could get us back on track again.

I don’t know if it’s just because I’m a man or just because I’m very logical with how I process everything but trying to comprehend what had just happened was extremely difficult. Part of me wanted to bury the memory of what happened but I needed to remember everything I could as we only had 16 days with our precious little man.

Watching everything that Kerri was going through made up my mind. I couldn’t relive that memory over the phone, I simply couldn’t tell our story to a complete stranger on the off chance they might know someone that could possibly, maybe, sort of, help. Being made to feel that weak meant I did the only thing I could and that was to lock those feelings up and hope to deal with them if and when I eventually can. That was months ago, I was back at work within weeks and everything was exactly as it was before I left. Not having an easy route to any form of support meant it just seemed like too much trouble. Dealing with it later was always an easier option and it’s now been so long that the any unresolved feelings are just muddied by day to day life.

If help isn’t given when the events are happening then you will be fighting a much harder battle. What could possibly have been achieved in the months after Harrison’s death will now take me many years to resolve. Help at the right time could have such a big impact on the bereaved as well as providing a cost saving to our NHS in the long term.

Fill your house with memories of them, no matter how big or small they are. If you don’t have pictures or scans, even seeing their name in print, or on a feather in a frame is a source of comfort.

I found the best place to get peer support was Instagram. I have an amazing support network of Mummies and Daddies who share their beautiful lost babies, talk about Harrison in a positive way, remember anniversaries, write his name in the sand, light candles for him, and say his name. This amazing community has built a safe space for people to talk about all aspects of baby loss, and share the pictures that others may be uncomfortable to see. I’ve made some hopefully lifelong friends from this heart-breaking situation. I also found some amazing baby loss blogs through this platform.

Don’t be afraid to ask for help. Some areas have bereavement counselling offered for free by places like The Co-op Funeralcare. I wasn’t signposted to this service, I don’t think my hospital even knew about it, another loss Mum knew where to look, and sent me their details.

Be kind to yourself and take your time to grieve, but know that it’s still ok to find ways to smile again. I’ve promised myself to live the best possible life I can, for Harrison, because I feel I owe him that. I will live FOR him and I will say his name as often as I can.