Posted at 16:26h in Blog, Stories by James Havelock 0 Comments 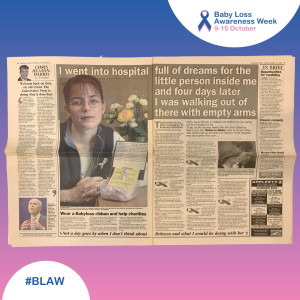 2022 marks 20 years since the beginnings of Baby Loss Awareness Week.

We’re proud to share the story of one of its co-founders, Carolyn Bray, who is the Assistant Director of Income & Engagement at Sands.

The following is a transcript of the article that was published in the Lincolnshire Echo on October 15, 2002.

Today, as the country marks the first ever Babyloss Awareness Day, Rebecca Atkins talks to Carolyn Bray who helped to set up the event in memory of her daughter who died earlier this year.

To most people June 4 is a pretty innocuous date but for Carolyn and Greville Bray it’s the day their world fell apart. For prospective parents, the two weeks before the birth of a child are an exciting time. The waiting is nearly over and a whole new world is about to begin, filled with hopes, dreams, and aspirations for the future.

But just 12 days before the birth of her second child, Carolyn was rushed into hospital and told the devastating news that doctors could not find a heartbeat for the baby. She had died when the placenta had come away.

The trauma of that news, coupled with the realisation that she would have to go through the heartache of giving birth to Rebecca, is something that, four months on, Carolyn is still finding hard to come to terms with.

“It was an absolute nightmare and by far the hardest thing I have ever had to deal with, she said.

“We had passed all the worrying stages of pregnancy with no problems whatsoever. With only 12 days to go we felt it was just a waiting game before our family would be complete – a daughter for Greville and me and a little sister for our four-year-old son Matthew.”

“I went into hospital full of hopes and dreams for the little person inside me and just four days later I was walking out of there with empty arms. It was devastating and no matter how much people sympathise they can never really understand unless they have gone through the trauma themselves.”

“For days I was in total disbelief and felt totally detached from everyone and everything. Even now I still find it a struggle every day to accept what has happened.”

When Carolyn came out of hospital she was amazed to find just how little support there was for families like hers who had gone through the trauma of losing a baby. With nowhere nearby to turn to for help, Carolyn, who lives in Kirton, near Boston, found herself trawling the internet for answers.

There she came across a group called Babyloss.com, an organisation set up by mothers who had faced similar anguish to hers.

Carolyn, 27 said: “At last here were women I could relate to – I felt that finally I could start to get some answers to what I was going through. I had known women who had suffered miscarriages but never any who had gone through the equally traumatic experience of having a stillbirth.”

“Through the internet I was able to post messages on to the web and compare my feelings with others who could understand how I felt.”

She enquired whether there was a similar set-up in Britain but was told there wasn’t. Now, together with her new found friends, she has set it up in this country too and is planning to lobby for it to become an officially recognised day annually.

She said: “There are so many people who have gone through, are going through and will go through what we have all suffered. Unfortunately, it’s an unspoken issue that nobody likes talking about for fear of upsetting people. This really has to change as we can’t all sit here and suffer in silence and individually.”

“Forming friendships over the Internet with other women who have endured the same heartache as me has really helped. We have a special bond and one woman in Scotland has been a rock for me – I think our friendship will last forever.”

Losing Rebecca was not only hard on Carolyn but also on her son Matthew and her husband Greville, a 33-year-old sales manager. Matthew had been very involved with the pregnancy, talking to the bump and attending all the pre-natal check-ups with Carolyn.

It was Greville who had to explain to Matthew that his sister had died and wouldn’t be coming back with Carolyn from the hospital.

Carolyn said: “Rebecca’s death has been very hard for all of us but I think people always expect it to be harder for the mother. I don’t believe this is the case.”

“Greville has lost his daughter too and he had all the same hopes and dreams for her that I did. I think Rebecca’s death has brought us closer together, but I know it has been very hard for him.

“People will sometimes ring up and ask Greville how I am doing without even sparing a thought for him. It takes two to make a baby and we are both suffering the same loss.”

“It’s very difficult for the father too – he is expected to be strong and keep the family together, but he hurts just as much as I do. Fathers are the forgotten victims in tragedies like this.”

“For once I would like people to ring up and ask him how he is doing – and to genuinely mean it.”

For Carolyn every day is a struggle, and she says that having to look after Matthew is one of the few things that keeps her going.

“Matthew is my reason for getting up in the morning. If I didn’t have to look after him, I think I would just hide under the duvet for the whole day.”

“Not a day goes by when I don’t think about Rebecca and what I would be doing with her. I think about struggling with the pram to take her to the shops, wondering how much her expressions would have developed and what kind of character she would have.”

Coming to terms with the loss of a baby is one thing but having to deal with people’s reactions is another, says Carolyn: “They don’t know what to say and so they try to avoid us even going so far as to cross the street.”

“Of course, we try to put on a brave face and people don’t see the cracks inside but it is amazing how a tragedy like this really makes you realise who your friends are.”

“I know that sounds really clichéd but it’s the truth. People who we thought we could rely on have let us down and others who we don’t really know that well have been really supportive.”

“I know it is difficult for people because they don’t know what to say and they don’t want to upset you but sometimes when you are grieving you really would appreciate a friendly gesture like someone just popping in for a coffee and a chat.”

“I think about Rebecca every day and I naturally get upset. However, not talking about her isn’t going to make the pain of the loss go away so I wish people would just try to be more relaxed around me.”

In a move to honour Rebecca Bray’s memory and other infants like her, the Babyloss group has set up an initiative selling ribbon pins. The idea behind the campaign is to allow people the chance to commemorate the brief lives of babies who have died while at the same time supporting charities that help families to cope with the tragedy of bereavement.

The profits from the sale of the pink and blue ribbons is split equally between the Miscarriage Association, the Stillbirth and Neonatal Death Society (SANDS), Antenatal Results and Choices (ARC), the Ectopic Pregnancy Trust and the Babyloss Fund.

Carolyn Bray said: “The death of a child at any age is devastating but it can be hard for relatives and friends to understand the impact of miscarriage and stillbirth.

“Wearing a Babyloss ribbon pin as an acknowledgement will also help to support national charities in their work with distressed parents.”

“Losing Rebecca is the hardest thing I’ve ever had to cope with but if through the Babyloss group I can help other bereaved families, then her death will not have been in vain.”