Posted at 13:00h in Blog, Stories by James Havelock 0 Comments 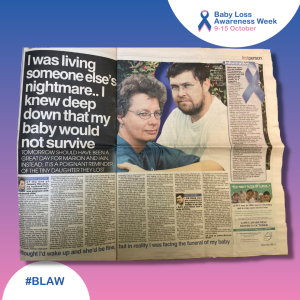 2022 marks 20 years since the beginnings of Baby Loss Awareness Week.

We’re proud to share the story of one of its co-founders, Marion Currie, who is a Database Co-ordinator at Sands.

The following is a transcript an article that was published in the Daily Record in October, 2002.

At the end of January this year, my husband Iain and I discovered I was pregnant with our second child.

We were delighted. Although it had been seven years since the birth of our son David, we had always wanted another child and I was so happy to know another was on the way.

The baby was due tomorrow October 10 but there were some problems to iron out. I work in the chemistry labs at Strathclyde University, so I immediately my employers of my condition.

They were worried. It’s quite a sexist, unsupportive environment. On top of that, a colleague had suffered 2 miscarriages within a year, and a student had been working on the labs without telling anyone she was pregnant.

They panicked and hauled me out of the labs and into an office.

The first trimester went well. I was sick only four times, and although tired, I knew it was all normal. I had a scan at 13 weeks and saw the baby with a strong heartbeat.

Most of my worries had flown away by that point, because you do feel 13 weeks is such a big steppingstone in pregnancy. After all, only 1% of women miscarry after the first trimester.

By 17 weeks, however, I had some bleeding. It turned out I had a cervical polyp which had to be removed. This is a bit like having a skin tag.

With all the extra blood pumping around the cervix during pregnancy, the polyps can grow faster and bigger.

It was taken out on the Friday, and I felt fine. But by the Sunday, I was bleeding again.

I was admitted to Simpsons Hospital in Edinburgh on the Monday as no one seemed to know where the bleeding was coming from.

My membranes ruptured later that day, but there was no staff member to scan me, so I had to wait until Tuesday to be told there were difficulties.

When the membranes rupture, you usually go into labour within 48 hours, so I knew it wasn’t looking good.

I was put on antibiotics in case of infection and another scan showed there was no fluid around the baby. There was still a heartbeat, though, and the cord flow was fine.

Despite this, I was told there was an incredibly slim chance of the baby’s survival.

I was living someone else’s nightmare. I was given bed rest and told to stay lying down. It wasn’t going to help. The same consultant who had removed the polyp told me that had nothing to do with it, nor did working in the lab. It was just all coincidence.

On the Saturday, we were told to think about inducing the baby as the chances of infection were increasing. I always knew I’d lose the baby, but if I had only myself to think about, I would have hung on just in case.

But I had Iain and David to think of, so I decided that would be the best option.

I was induced by pessary and the whole birth only took 90 minutes. Iain was there throughout, but there was no consistency of staff as it was during shift changeover, which takes precedence over all over things.

Lesley was born on May 18, 2002, at 7.30pm. She weighed 170g and was 22cm long. The midwife pottered about, taking pictures, and preparing paperwork. Iain held Lesley, who was wrapped in a sheet, then a towel.

She looked more normal than I had expected. I thought she would be like an X-Files alien with a head too big for her body, but she was just a baby.

You can’t be prepared for anything because this sort of thing should never happen. Of course, I wanted to see her, but apart from that I had no idea.

On top of everything, the placenta wouldn’t come out, so I was rushed to theatre for a general anaesthetic.

When I came back, I spent the night on the deliver couch as there was no bed in the room – all of this is wrong and needs to be looked at.

Why in a new hospital like the Royal Infirmary at Little France have all the option not been considered? Some hospitals have special rooms and suites for these situations. Why does Edinburgh not have this?

I didn’t really get much help and eventually I had to admit I had seen her enough. I was in no fit state.

I was still felling groggy from the general anaesthetic. I told the midwife who was with me, and she took Lesley away. I was tired, sore, I wanted to get out. I was crying on and off all night and not grieving properly. I thought I would wake up and Lesley would be fine.

But in reality, I was facing the funeral of my baby after a full post-mortem had been undertaken.

I wasn’t prepared for the staff telling me different things. You want them to be singing from the same hymn sheet, but they don’t do that. Some of the doctors were appalling, and that is one thing that gets to me.

At this most awful of times, your care is totally dependent on luck.

Modern society is so far removed from infant death that when a miscarriage or stillbirth occurs, the parents and families feel isolated.

The NHS can treat the physical symptoms – but the motional and psychological aspects are a different matter, as is the deluge of grief.

Lots of people say friends and family often avoid the subject, and we certainly found that out. You’re left to deal with your grief alone.

I found charity support and internet sites a godsend. I lurked around Babyloss for a while – most women do with that type of subject.

You spend time checking it out reading message boards, wondering whether you should contribute. I had been logging on for a while when someone asked a question about using paracetamol in pregnancy. Because of my background, I answered from a professional perspective, and it all snowballed from there.

I then began posting message regularly and found it a great help. I have found so much aid and mutual support from all the women at the website. It helped me retain my sanity and understand I am not alone.

Babyloss helped me so much that in order to publicise and raise money for them, I became Scottish co-ordinator. We’re not looking towards our first Baby Loss Awareness Day on October 15.

Its aim is to allow people who have had their lives touched by the loss of a baby during pregnancy or after birth to remember, at a time when lots of others across the country will be showing the support for charities who help people through this.

This year’s Babyloss Day is the UK’s first, although in the US, a whole month is dedicated to pregnancy and infant loss awareness.

Babyloss is a fund which aids support groups and local projects. The website was established in 2000 to provide forums, a dedication area, resources, and email befriending.

We hope the day will offer bereaved parents the chance to commemorate the brief lives of their babies.

The founder of Babyloss has said the death of a child at any age is devastating, but it can be hard for relatives and friends to understand the impact of miscarriage or stillbirth.

I support that sentiment – people often don’t know what to do.

We need to remember our lost babies – we owe that to Lesley.

I DO think men are sometimes forgotten in the middle of all this – but I also think that’s okay at times.

When Marion was pregnant with David, we would get told fortnightly how things were going. That felt like part of a joint project. But with this, it was all about Marion. That’s understandable – it’s her body.

I never really got the chance to know this baby. I was at the first scan, but I only ever felt one kick.

The fact is pregnancy is all about the woman – it’s only after the birth that you can really share things.

When Marion went thought this nightmare my job was to support her in a different way. I wasn’t the one physically going through it.

I was working when she first went to hospital, and I had David to think of. To be honest, I did think maybe she could just get a wee infection and get it all over with. I wanted nature to take its course, helped by medicine, as quickly as possible.

I did want it all to be over. When Lesley was born, I was sad – but I was also relieved.

I cried at the time but saved most of it for private places.

Like Marion, I was surprised at how normal the baby was. Everything was in miniature form, although it did affect me that her skin was translucent, and you could see all of the blood vessels.

I stayed with her and held her for a while. I probably wanted to stop holding her quicker than I did but knew it would be my only chance.

My priority is Marion. I have felt a bit lost – she is on the internet so much I do feel excluded to some extent. I don’t use any of dads’ sites, they just don’t feel right to me.

I really don’t think dads feel it in the same way. I don’t know if maybe I feel guilty about that, but there’s nothing for me to focus on.

The baby hasn’t been in my body, I haven’t felt it kick, my hormones haven’t changed.

I’ve lost a child too – but for me, I still have Marion and that’s the most important thing.