Posted at 15:02h in Stories by James Havelock 1 Comment 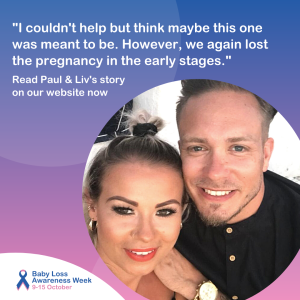 The last 4 plus years have been difficult for my wife, Liv and I with what the doctors can only describe as ‘unexplained infertility’. Although we took some comfort knowing there was nothing ‘medically’ wrong, it was hard not having any form of explanation as to why things weren’t happening for us.

That’s 50 plus months, hoping and praying that maybe this month might just be ‘the month’.

It became harder with each negative pregnancy test and at a time when all our friends appeared to be falling pregnant around us so easily. I of course appreciate this may not have been the case, but you can’t help feeling this way. Every social media post displaying news of scan photos, baby showers or gender reveals felt like a sickening punch to the stomach.

In 2020, we qualified for two rounds of IVF funded by the NHS in Sussex. We felt extremely fortunate as strangely this isn’t something which is available nationwide in the UK and depends on what County you reside.  This is something that must change as surely everyone deserves the same opportunity.

Our first round was unsuccessful. The second we had our first ever positive pregnancy test, a feeling I will never forget. Unfortunately, this feeling was short lived. On attending our first scan we discovered the heart-breaking news that ‘our baby’ had no heartbeat. Again, a feeling I will never forget, but this time for very different reasons. Although we knew the pregnancy wasn’t viable, Liv’s body refused to let go, resulting in further scans and trips to the early pregnancy unit. Eventually two weeks later Liv had an assisted miscarriage.

We continued our treatment having one other positive test which coincidently fell on Father’s Day. I couldn’t help but think maybe this one was meant to be. However, we again lost the pregnancy in the early stages.

Having now come to the end of our treatment we were not only left with the grief of losing two pregnancies, but also the realisation that we were most probably never going to have children of our own.

During this whole experience I have felt a wave of emotions swaying from complete joy and happiness to a dark level of jealously and anger. The latter resulting in me having to take some time away from a stressful work environment to process all these emotions.

I recall thinking to myself how selfish I was. It’s not that I didn’t want to be happy for others, it was simply so hard to see people with something which we both desperately craved.

Infertility is something I had completely taken for granted previously, without much of a thought as to ‘what if we can’t?’. Growing up I simply assumed it was something that would just happen – a lesson that you should never take anything for granted in life.

Another difficult hurdle as a result was the feeling of losing friendships. We admittedly distanced ourselves from those around us who were pregnant or had young children. It was just difficult to be around them and still is in many ways. It’s something that I hope in time will become easier. In turn others distanced themselves from us as they perhaps felt guilty or maybe simply just didn’t know what to say. There were definite times when I felt a lack of empathy and understanding from others.

Although Liv and I have remained strong as a couple, we’ve both been to dark places. Places which I’m pleased to say we feel are now behind us. Of course, there will always be days of sadness, for example when we reach significant ‘due dates’ etc. and I’m sure we’ll have a good cry together! However, time is a healer and we are now able to see a future without children.

Although we were fortunate to get IVF on the NHS, the lack of aftercare left a lot to be desired and is something that I feel needs to be addressed. For those not aware, IVF is no walk in the park and is both emotionally and physically draining. Don’t get me wrong, it will all be worth it if you get the happy ending, but where is the aftercare and support for those that don’t?

I’m totally aware that there are many less fortunate than ourselves, so it’s important to be grateful for what you do have. There’s always light at the end of the tunnel and it’s definitely good to talk.

As a Police Officer for what’s now approaching 14 years, I am unfortunately far too well accustomed to dealing with other people’s trauma. However, nothing truly prepares you for when you go through your own. To others maybe it doesn’t seem ‘that bad’, but when you’re living it, it’s consuming.

For the majority of men going through IVF, we have a pretty easy ride in comparison to our partners. There are times when you feel completely useless, but it’s important to remember your main role is to support your partner.

Initially, I thought being strong for Liv meant bottling up all my feelings and emotions as to not upset her. However, after a while I learned this was counterproductive and the true meaning of being strong is actually recognising your emotions and dealing with them.

I know Liv feels a terrible amount of personal guilt and responsibility for our infertility. Of course, I would have loved nothing more than having a little ‘us’, but I remind her, this isn’t the reason we married.  I for one will be forever grateful for Liv putting herself through this. Something which gave us the chance of having a family. Unfortunately for us that journey has now ended.

Liv and I have made the decision not to continue with any further treatment. For us personally, we just needed to take back some control. Something we felt, we’d completely lost over the last 4 years. The future for us will be taking a step back from stresses and doing more of what we love.

If you read this and find yourself in a similar situation to ourselves.

Please remember… just because your fertility story hasn’t ended with a baby, it doesn’t make you a failure.

If you’ve been affected by miscarriage, Miscarriage Association are there to offer support.