‘A brother and an uncle’ – Chris’ Story

Posted at 14:05h in Stories by James Havelock 0 Comments 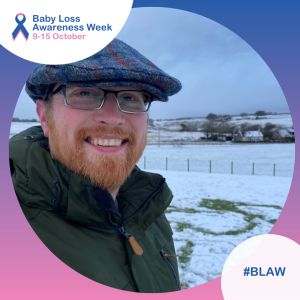 I grew up visiting a grave and speaking about a brother called Jason. I never met Jason. He was the eldest of the family and born 3 years before me. I knew he was born dead. Occasionally people would say it was a stillbirth and my parents would correct that. He was born dead. That is the language they used, and for whatever reason behind it, there was no ambiguity for us siblings.

Of course, for the rest of us Jason was long ago history, as is everything that happens before you are born. I was one of five children, but occasionally I would say six because it didn’t sit right that the number five strictly wasn’t the truth. We had one sister but were their four or five of us brothers? What was the right answer?

Through childhood we visited a grave every year. It did not have a headstone, or rather it had someone else’s headstone. The grave already had relations with a different surname who had all died out. My parents chose the plot as there was still sufficient space for them to go beside Jason when their time came. A new gravestone was not added until well into my teenage years. We visited as a family and us children got bored and ran round the other graves without really caring what my parents were up to.

Getting older I shared the story with people honestly, but without understanding. I used to go to visit the grave myself when going past and I suppose part of that was trying to understand. I thought I did, but that just wasn’t true. The real journey for me did not start until my wife was pregnant with our first child.

I knew the basic facts of Jason’s story. There was no reason to worry. No concerns about genetic problems, nothing that would impact on the birth of my own child. But I was now in a position where those facts in my head were being overrun by the doubts of my heart. The midwives at the scans would ask about any family history of problems, and I would mention it but say it wasn’t anything that should concern us. But…what did I know? I had no idea.

So, I phoned my mother. For some reason I cannot remember, I was at one of those large hardware stores at the time. I remember walking around the back of the warehouse near the carpets, and bathroom fittings asking questions I had never asked, and perhaps never thought to ask. “What actually happened? How did it go? Should I be worried?”

My mother told me of everything being okay. She told me of a good pregnancy and of labour progressing normally. She told me of the doctor not being concerned. She told me of the silence when Jason was born. The realisation that he had not survived his short journey to the outside world. But she told me most of all the words I needed to hear: “Don’t waste your time worrying about what might not happen, until it does.” I understood. I was missing out.

I was missing out on the joy of pregnancy, of the joy of expecting a child. I was missing some of the fun of setting up a room and learning what I needed to do, and how to look after the baby. I was worried about the unlikely, and missing out on what was real. Of course, I did not stop worrying but I pushed it back. I did not let it go but kept it in reserve for when it was needed – if it was needed. I go on with the challenges and joys of the pregnancy.

The birth did not go entirely smoothly but my daughter was born without major concern. I say that, but she was swept out of the room immediately after birth to check her. In retrospect there maybe was concern that I knew nothing about, which in practical terms, amounts to the same thing as no concern for me. I held this tiny girl in my arms, next to my wife and wept. I wept for the tiredness I felt. I wept for the exhaustedness of my wife. I wept to release the emotions of seeing my wife give birth, when I held together for her. But I also wept with relief for the journey that was not mine to take, which my parents had to travel. Would I have had the strength to face that? I couldn’t tell but I wasn’t wasting myself worrying about what hadn’t happened. =

For our second child the worry was less. Things had gone “right” once and did again. I have had more conversations with my parents then and since, and there are lots of other things for me to process. My father is a farmer, and my mother’s family are too. They know about the annual calving cycle in the herd. After Jason’s death my father had said to the doctor: “I know what it’s like, they don’t all survive.” There is nothing flippant or belittling about that comment. There is nothing that is uncaring. His heart was breaking but he understood the risks that were always present. We do everything we can to minimise those risks, but we have not got rid of them yet. “They don’t all survive.” Jason did not.

I learnt that my mother thinks about Jason every day. It’s obvious when you stop to think about it, but when would you do that? My father does too. My mother’s metaphor has been very helpful to me. It is a weight she always carries. No one can see it. Sometimes it is small and fits in her back pocket. Maybe on those days, she only notices it when she sits down, and it just feels slightly uncomfortable for a moment before she settles. Other days it is larger, you are always conscious of it being there, holding you back. And sometimes it’s a huge boulder. It weighs her down almost unbearably, as she goes through the day with it pressing down on every fibre. It grows and shrinks generally without reason, but of course feels heavier on that early summer day when everything went wrong. No one else sees it; no one can carry it for you.

The doctor was young. Perhaps he was overconfident. Perhaps he didn’t do everything he could have, or perhaps he did. Undoubtedly, he learnt from the experience, and I hope he acknowledges two parents who choose to live life without blaming him, or the hospital, or God. They understood that bad things happened, but they were going to not allow that side of the experience to govern them. They would remember, but they would choose to nourish the positive memories the most.

I think my wife was the first person to use the phrase Uncle Jason. We were talking to our children around Jason’s day. (It is Jason’s birthday and death day, so simply Jason’s Day in my mother’s language.) My mum sends the family Whatsapp a happy birthday message for whoever’s birthday it is. And Jason gets his mention too. At time of writing there are now 13 grandchildren in the family who have an Uncle Jason that they never met. Except there are more than that. One is on the way, but that is not the end of the list either.

My brother called one day with news. He was phoning to let me know that they were expecting their second child, and to let me know that they weren’t any more. My parents had heard the good news on Saturday night. Something went wrong on Sunday and by Monday I got my phone call. It was supposed to be a call of happiness. It was so sad. Unsure of even the gestation we couldn’t even say if it was an early or late miscarriage, but to me neither phrase is okay. We have our words: their baby had died.

The hospital were great. My family were great. Jesse (boy or girl: couldn’t be told) was buried next to his uncle Jason. I went home to help my father dig the grave. My father described Jason’s coffin as the size of a shoebox which he could carry in one hand. My brother carried a coffin the size of 3 DVD box set. There were only a few there standing round the graveside. We acknowledged life, and pain, and family. We thanked God for the gift of even short life, and took our sorrows to Him. It was a real honour to be able to help dig and fill in the tiny hole as a small act of a caring brother. I spoke with my parents. They had 24 hours of joy: a full day when there was another grandchild. They are thankful for that small amount of time, and honoured to have Jesse in their family. Honoured too that he lies with Jason. They again chose to cherish the positive parts and bring them forward.

I use what I can of my story to help understand others. In my work and my personal life, I acknowledge Uncle Jason and little Jesse. This helps me to acknowledge those countless others, in so many other families, and the pain that goes with it. In past times I have been that git who doesn’t know what to say and so avoids those who are hurting. I’ve tried to save feelings and not remind them of what, I now understand, they have never for a moment forgotten. I have learnt that I should speak aloud, even if it’s to say nothing but “I’m sorry”. I know that death and heartache are part of life. I know that sometimes death happens the wrong way round with parents burying children. I know that my parents lost friends who didn’t know how to say to my mum and dad “I’m sad with you.” And gained closer friends who, although merely acquaintances and strangers, reached out in sadness to acknowledge and honour their son.

I sometimes think about what Jason would have been like as a big brother, but I already have a big brother who has been all that for me. Jason lived the life given him, short as it was. His journey taught me that I am to live the life given me. I’m not to worry about what might not happen, because I’ll miss what is happening. I will try to teach my children the same.

My wife is artistic. She once gave my mother a family tree picture. It’s a tree cut out of paper with my parents’ names in the trunk, my siblings and their spouses on the branches, and leaves with grandchildren’s names. It has become a living picture with updates glued on through marriages and births. Jason has his branch. Jesse has a leaf. In time there will be more generations, but they will need their own tree, for we are blessed that there just isn’t room in the frame. While new people are added as they enter our lives, no names are pruned from that tree.